skip to main | skip to sidebar

Arleta had a birthday last week, and we're celebrating it on October 1st. Why? Because we weren't ready! When you're making hand-made stuff, it's hard to give it on the needles. It just doesn't feel like the same "ta-da!" you were looking for. For my part, I was bringing the cupcakes, and some handspun yarn. I've been plucking the bunny (that sounds nasty) for quite awhile now, and spinning a 50/50 merino/angora two-ply yarn. I'd do it while we were playing DnD, or I was at the knitting get-togethers, or in my Ten Minutes A Day spinning group on Ravelry. I'd have this stuff out and spin, spin, spin. And I enjoyed every minute of it. I was a little worried when I plied it together, because it didn't seem like my spindle was going to hold all of the amount, and I didn't want to give it to her in two cakes. But with a little care, I got it done. Then I washed it... erm... September 30th (yesterday), and stuck it in front of the fan to dry. That worked great, and it was done after several hours. Then I realized that I had forgotten to thwack it. My husband and I tried after it was dry, but it just wouldn't bloom the same. And there wasn't any time to rewash it for new thwacking, so I had to let it go and began to make my yarn cake. Now, I don't have one of those spinny things that winds your yarn for you. To make myself feel better about that, I've been working on making my yarn cakes look as if they came off of a ball winder (see? I remembered the name). I also wanted to measure how much yarn there was, so I ran it through a yarn meter (okay, a fishing line meter. Same thing) as I went. 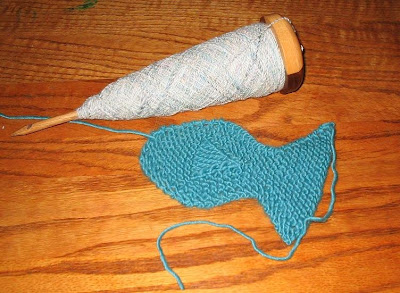 It went very smoothly, but I had to layer the yarn so it wouldn't tangle as I was winding it. 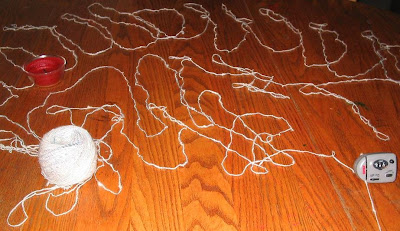 I'm keeping my eye on my yarn meter as I go, watching the numbers go up. Suddenly, I realize that the yarn meter only goes to 999, and I'm about to roll it over. It's actually late enough at night that I'm wondering what I'm going to do. I had about decided to write down "1000" and then begin the numbers again when my brain caught up. I could just add 1000 to whatever number the meter gave me when I was done. I'm really glad I thought of that before I got out the pen and paper. 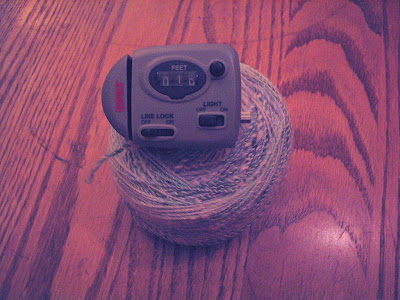 And when I was finished, here was the final number. That's a 19, sorry about the crappy lighting and bad angle. So that's 1019 feet of yarn, divided by 3 to get yards, and it's 340 yards. 340 yards from just under 4 ounces! I had to say that again. That's a lot of yarn to do on a spindle, if I do mention it myself. Very cool. And it's a bit nubbly, a bit of color changing, and a bit thick-and-thin. I love it. I hope Arleta loves it, cuz I love her. It's good to have her as a friend. Happy Birthday (belated), Arleta!
Posted by Carrie at 5:28 AM 10 comments: Links to this post

Carrie
Put good things into the world, good things will come back to you. Do it every day, even if the second part isn't happening...

Previous | Next
<< ? Knitters With Attitudes # >>
Powered by RingSurf